https://youtu.be/M8hCf3VvFOk
Taxi to the Darkside

Using the torture and death in 2002 of an innocent Afghan taxi driver as the touchstone, this film examines changes after 9/11 in U.S. policy toward suspects in the war on terror. Soldiers, their attorneys, one released detainee, U.S. Attorney John Yoo, news footage and photos tell a story of abuse at Bagram 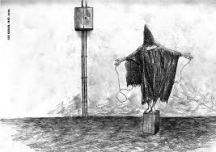 No one person murdered Dilawar, a 22 year old Afghan taxi driver, abducted, imprisoned and finally killed at Bagram air base in December 2002. Rather Dilawar died as the result of a sustained programme of torture visited upon him on the orders of the US government.

In Taxi To The Dark Side director Alex Gibney probes meticulously the decision making, chain of command, and documentation that sanctioned the use of torture in Afghanistan, Iraq and Guantanamo Bay (the latter’s gift shop featuring in one segment).Gibney shows how the brutal interrogation techniques used by the US military were authorised directly from key government figures Donald Rumsfeld and Dick Cheney, and were then cascaded through the entire chain of command, resulting in the human rights abuses recorded at Abu Ghraib and Guantanamo. Using a similar format adopted in his exposé of the Enron corporation,The Smartest Guys In The Room, Gibney works with a broad range of interviews from high ranking military lawyers, FBI officials and ordinary soldiers, to build up a detailed picture of the logic driving the US torture machine.

Arrested by a US backed militia and accused of being involved in a mortar attack on a US base, Dilawar was detained at Bagram air base. There he was subjected to a range of brutal treatments which left his legs literally beaten to a pulp. Forced to endure long hours shackled to a ceiling and forced to stand, Dilawar’s body finally gave up.

He had been one of the 90 percent of US-held prisoners who were bought from local militias – the occupiers having in effect created a market for “terrorists”. Several of the guards responsible for beating Dilawar were tried and convicted, and as they present themselves in the film it becomes clear that they were the fall guys under intense pressure

to get results. Their commanders were subsequently promoted, the politicians escaping untouched.

If there were one criticism of this revealing film it is that in concentrating on the impact of these policies on US society, it hears only fleetingly from the victims of the terror and their families, and thus misses an opportunity to return to them the humanity, dignity and sense of justice of which they have been robbed.

“Love is a canvas furnished by nature and embroidered by imagination.”
―Voltaire

“Life is short and we have never
too much time for gladdening the
hearts of those who are travelling
the dark journey with us.

Oh be swift to love, make haste to be kind.”
― Henri-Frédéric Amiel“

“I am an atheist and that’s it.
I believe there’s nothing
we can know except that
we should be kind to each other
and do what we can for other people.”