“Judge a man by his questions, rather than his answers.”  ~Voltaire

“He isn’t an anti-capitalist! He is for reforming capitalism, not changing capitalism. He is really a lot closer in ideology to Hillary Clinton than he is to me,” said Stephen Durham, the 2012 presidential nominee of the Freedom Socialist Party. “His is the politics of a lesser evil among some very bad choices.”

“He is a progressive on the home front, but he is pretty reactionary when it comes to foreign policy,” says Gloria La Riva, the 2016 presidential nominee for the Party of Socialism and Liberation. “He supported the Israeli war against Gaza. He supports the drone bombing campaigns in other countries, which is a war crime.”

…Should Sanders win the presidency, she added, he would, like the other major party candidates “become the CEO of the capitalist system of the United States, one whose primary and sole objective is to maximize the power of the U.S corporations and the U.S. military.”

…“Their general position seems to be that there are some positive things about the Sanders campaign, some positive things are better than no positive things (the usual), so let’s chalk it up to a win,” wrote Joe Monaco, the managing editor of Communique New England, a popular socialist website. But Monaco rejects that approach, calling Sanders “an imperialist capitalist shill.”

…He could never win the nomination of our party,” said La Riva. “No matter what he says, I don’t even consider Bernie Sanders a real socialist.”

“While Sanders is willing to criticize many of the most egregious over-extensions of American empire, it seems he has no interest in contesting the American suppression of democracy across the globe. And this cannot but undermine the struggle for democracy and freedom at home.

Sanders is certainly correct that achieving his reforms will require a political revolution. But it will have to be one that embraces a far more encompassing vision of democracy than he himself has.”

The left and working class in general has much to lose by backing Bernie Sanders. This includes the following:

1. Our good name by backing a scoundrel faux socialist, war monger, and supporter of America’s brutal police.
2. Time, energy, and money that would be better spent building up the strength of our movements and strike coffers.

3. Time and energy that would be better spent building an actual revolutionary socialist party in opposition to the ruling capitalist parties. …we must have a long term goal of building the kind of revolutionary party that can intervene in the streets, unions, and elections to bring change in the long term.

-Steven Argue of the Revolutionary Party

“After more than a half century of searching, perhaps in the nick of time, we may finally discover what must happen if we hope to survive. We feel powerless when leaders redefine torture to legitimize aggression, but if we intend to find truth, courage, and fidelity among these transgressions, we must take James Baldwin’s observations to heart.” 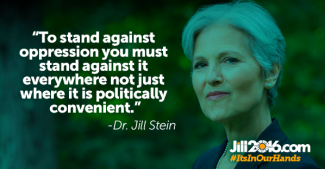 He told us, “The intangible dreams of people can have a tangible effect on the world…. The challenge is in the moment, the time is always now.”

the rest the essay:   http://www.ThePortlandAliance.org/JamesBaldwin

“Just being slightly less worse than the worst possible scenario is not acceptable. We have to be willing to stand up and throw off those chains of powerlessness. In the words of Alice Walker, ‘the biggest way people give up power is by not knowing they have it.’
We have it. ”
~Dr. Jill Stein