Americans are sick of war. Avoidable corporate wars have crippled our economy.  Beyond this, as more than 34 simultaneous wars expand, this continues to bankrupt this nation while creating new enemies and making everyone less secure.

Instead of digging a bigger hole, we can shut down the wars, invest in the American people and export knowledge, technology and peace instead of terror, munitions and war.

“The Green New Deal is a package of policy proposals that addresses global warming, war, peace and financial crises. This vetted plan echoes the New Deal, the social and economic programs launched by US President Franklin D. Roosevelt in the wake of the Wall Street Crash of 1929 and the onset of the Great Depression that made all ships rise.

Dr. Stein provided a guide. She was on 85% of the ballots. If a goodly portion of the 75% of the electorate who are leaning towards a third party vote Green in 2020, we can win this November.

The Green Party New Deal represents our best interests. The Peace Party may, after public debates with Trump and Clinton, win in a landslide. 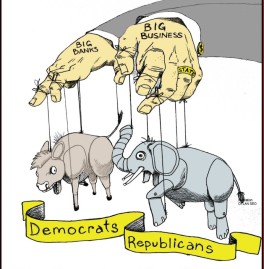 Expanding militarized-aggression, for profit, against sovereign states who did not attack us  is wrong-headed, unethical, a bit twisted and unsustainable.

The summer of 2009 marked “the end of the dollar’s reign as the world’s reserve currency. It marks the start of a terrible period of economic and political decline in the United States. And it signals the last gasp of the American imperium. That’s over. It is not coming back. And what is to come will be very, very painful.”

It is critical that we shut down avoidable wars and reinvest in jobs with justice.

We can rebuild sustainable infrastructure and restore human resources by choosing peace over war. These are the tasks at hand.

The pirates in charge of ongoing U. S. wars of choice are profiteers, pure and simple.
Their military arrogance and disdain for the public and the law is astounding.
But there are more of us, by a long shot… than there are of them.

Dr. Jill Stein, Howie Hawkins or whomever is chosen to lead the Green New Deal  is the right choice

War is not working…

“The minute we stand up, we are unstoppable. It’s time to forget the lesser evil and fight for the greater good.”…

Please Donate for Literacy and to keep this resource online.

And Thanks!  You make a difference.