ma’s military-industrial formula:  spending trillions to kill millions for billionaires.
This has not been working for the past 36 years …
https://thepeaceresource.wordpress.com/2015/06/10/the-liberal-apologies-for-obamas-ugly-reign/
Obama was to the right of George Bush on War, Torture and Civil Rights. Bush only claimed it was his “right” to render people for torture, rape and murder. Obama went further.
Barack claimed it was his right to murder anyone, anywhere, any time, for any reason or without providing any reason at all. He went on to murder innocent Americans who had committed no crimes without due process of law. Congress did not respond.

King Obama took the throne of a Global American Murder, Inc. a corporate entity which has expanded to include more than 800 military bases in 134-150 countries.

(At a time when NOBODY attacked us.)
Sometimes America was invited to establish military bases, but other times the CIA and Pentagon established bases with bombings, drones killing innocents, invasions and forcible military occupation.
https://revolutionresource.org/2016/07/01/king-barack-obama-murders-at-will-and-we-let-him/
While stepping back from governing to politic, look pretty and tell lies… Obama allowed the CIA, the Pentagon, profiteers and criminals to attack dozens of nations who have not attacked us for destruction, extraction, exploitation and extortion. This shameful display of aggression, in our name, has made America a pariah state.

Exporting terror, munitions, war, profiteering and war crimes has not been working out so well for the past 36 years. We are bankrupt.

FACT: The U.S. government is bankrupt!

The government has an “official” debt of $15.8 trillion and mounting. But wait, there’s

more. This doesn’t include the liability from Social Security and Medicare. When you factor these in, the amount according to some, exceeds $120 trillion. With U.S. Federal tax revenue of just over $2.3 trillion, that puts our debt-to-income ratio somewhere around 5,082%. .

https://revolutionresource.org/2016/08/24/america-is-bankrupt/
And bankruptcy is only the tip of the iceberg…
We continue spending trillions to kill millions for billionaires, sinking further and further into debt, and our current president, Don John Trump, is too busy building walls and enforcing racism to pay attention.”A sociologist credited with predicting the fall of the Soviet Union has warned that US global power is in a phase of accelerated decline under the leadership of Donald Trump — and will collapse while the property mogul is the White House.”

…Pretending will not change facts.

And while we plunge into fiscal disaster, environmental disaster looms…

Our war record (unprovoked aggression) does not inspire national pride. Our shameful export of terror, munitions and war has crippled the planet through neglect. And now we are facing  environmental disaster.

One in 10 people, globally, do not have clean water. The Earth is experiencing mass extinctions and species decline. Earth’s dying oceans are demonstrably rising to flood all shores.

This bankrupt shell of a nation is sinking fast. Now Trump wants to speed up our spiraling decline, with more wars, invasions and attacks for the corporate bottom line.

While calling for a declared war on ISIS mercenaries (armed and trained by the CIA), Trump wants to restart the nuclear arms race.

“Trump stunned nuclear experts by proclaiming in a tweet that “the United States must greatly strengthen and expand its nuclear capability until such time as the world comes to its senses regarding nukes.”

And Trump himself weighed in again, saying in a statement to “Morning Joe” host Mika Brzezinski of MSNBC:

“Let it be an arms race. We will outmatch them at every pass and outlast them all.”

The orange buffoon in the White House, kind-of elected by a curious 19% of the nation, has taken the throne to pout and shout about racism, misogyny and hate.

Feels like a circus without a ringmaster, going the way of Ringling Brothers and Barnum & Bailey. Now we have deviants running the show, the big top is gone and we may be folding up the tents sooner instead of later. And nobody is left but everyday American people to clean up the mess created by our so-called leaders. 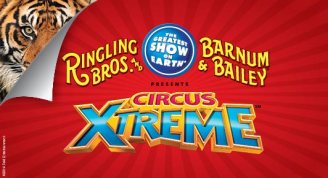