The Best Libraries In The World

https://youtu.be/LbJCjAzL78Q
The 15 Best Libraries In The World 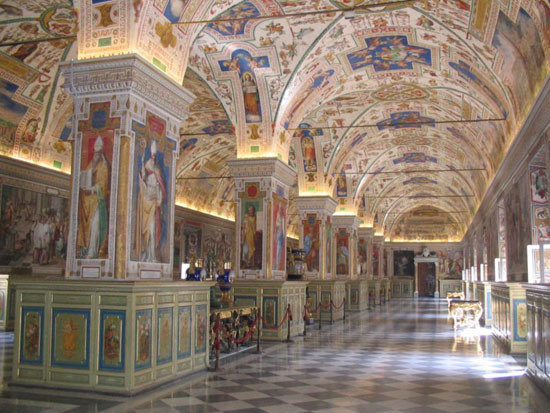 The Vatican Library, under the ecclesiastical jurisdiction of the Catholic Church in Rome, is one of the oldest libraries in the world. Though it was formally established in 1475, its existence in early forms dates back to the origins of the Catholic Church. For nearly 600 years, the library has added to its collection through historic acquisitions, generous bequests, and gracious gifts. The Vatican Library currently holds mor than 1.1 million books, 75,000 manuscripts, and over 8,500 incunabula. Fittingly, the library owns the oldest complete manuscript of the Bible, as well as many other significant works from medieval times. 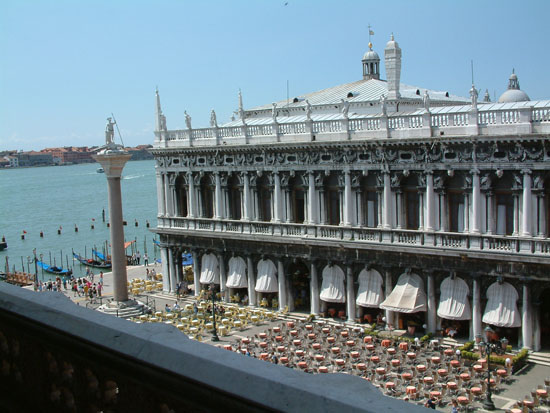 Fittingly housed in a Renaissance building in Venice, the National Library of St. Mark’s contains one of the most important collections of classical texts in the world. Though its lengthy construction period would not begin until 1537, collecting for the library began as early as 1468 with a gift from Cardinal Bessarion of 250 manuscripts and 750 codices. As of 1603, a law was enacted that required one copy of all books printed in Venice to be housed at the National Library. Today, the collection encompasses more than a million books, over 13,000 manuscripts, 2,883 incunabula, and more than 24,000 16th-century works. 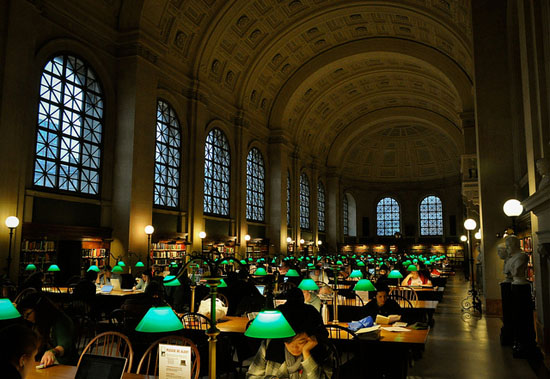 Established in 1848, Boston Public Library was the first publicly supported library in the United States and, with its present collection of 22 million items, also the second-largest. The Central Library consists of two buildings, the Johnson Building and the McKim Building, which houses the library’s research collection and exhibitions. Built in 1895, McKim contains many beautiful murals, including Edward Abbey’s famous scene depicting the legend of the Holy Grail. The main room of the McKim building — Bates Hall — also features a unique coffered ceiling. More than 1.7 million rarities are included in the research collection at McKim, including medieval manuscripts, incunabula, early Shakespeare that includes a First Folio, colonial Boston records, and a major Daniel Defoe collection. The collection is also home to the libraries of several notable figures in American history, including John Adams, William Lloyd Garrison, and Nathaniel Bowditch. 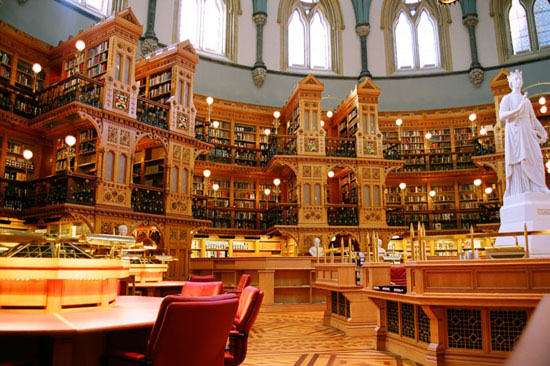 The Library of Parliament in Ottawa, Canada holds a special distinction on our list, as it is the only library of such prominence that its likeness is printed on the country’s currency (it is featured on Canada’s ten dollar bill). The design of this national landmark was inspired by the British Museum Reading Room, and includes walls supported by 16 flying buttresses, a vaulted ceiling in the main reading room, and white pine paneling with beautifully detailed carvings of flowers, masks, and mythical creatures. The collection encompasses more than 600,000 items, which is curated by a dedicated 300-member staff. While access to the facility is generally restricted to Canadian parliamentary business, tours are often made available to the public.

The New York Public Library is awe-inspiring for its scope and breadth. As the third largest library in North America with more than 50 million items in its collection, it encompasses 87 libraries serving 3.5 million people across the state. The Rose Main Reading Room acts as the centerpiece of the library, with grand arched windows along its 52-foot walls, and also featuring chandeliers and a gilded and painted ceiling. The library acquired America’s first Gutenberg Bible, and also houses collections with a special emphasis on Americana literature and printed materials. Among the most recognizable sites on our list, the library has made multiple appearances in feature films, as a key setting in the film The Day After Tomorrow and as a prominent backdrop in the original Ghostbusters, among others. 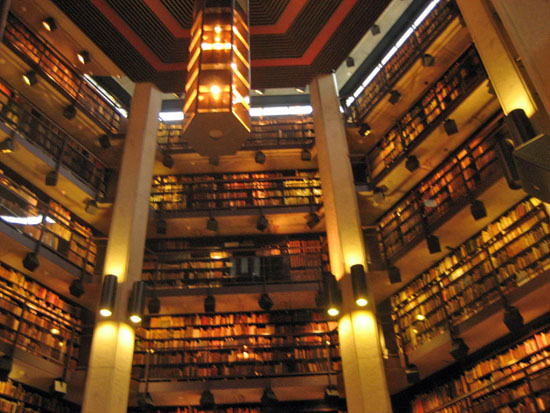 Affiliated with the University of Toronto, the Thomas Fisher Rare Book Library houses more rare books than any other collection in Canada. The collection includes unique artifacts like Newton’s Principia (1687), Shakespeare’s First Folio, the Nuremberg Chronicle (1493), and a Babylonian cuneiform tablet dating to 1789 BC. Robert S. Kenny, a Communist Party of Canada member, also donated a large part of the collection. In all, the rare book library includes more than 25,000 items with a special focus in labor movements worldwide, though with a particular emphasis on Canada and its history. 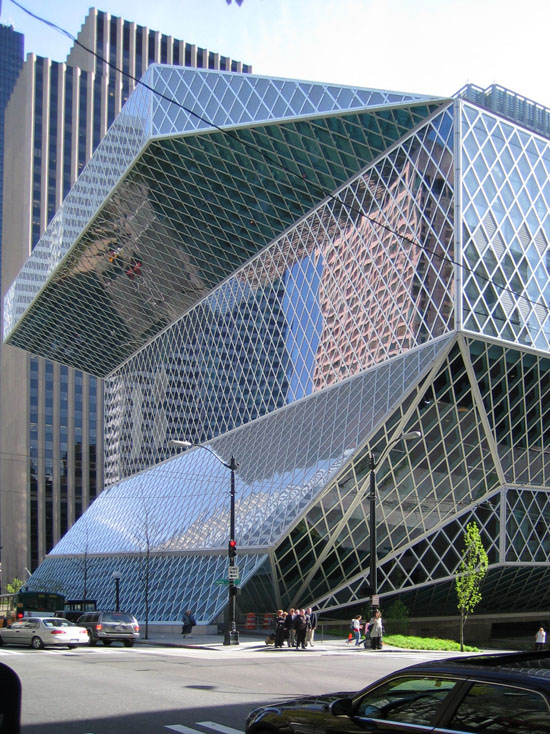 Unmistakably modern in a beautiful glass and steel design created by architects Rem Koolhaas and Joshua Prince-Ramus, the Seattle Central Library opened in Washington’s largest city in 2004. With their contemporary design, the architects aimed to create an inviting open and airy space, challenging the popular perception of libraries as dark and stuffy. The library was built with the capacity to accommodate more than 1.45 million books and mixed media materials. By 2008, the library had finally completed a ten-year “Libraries for All” initiative, which was aimed at expanding library access to a broader range of Washingtonians. It was the most expensive renovation of its kind in history, eventually totaling more than $290 million for the project. 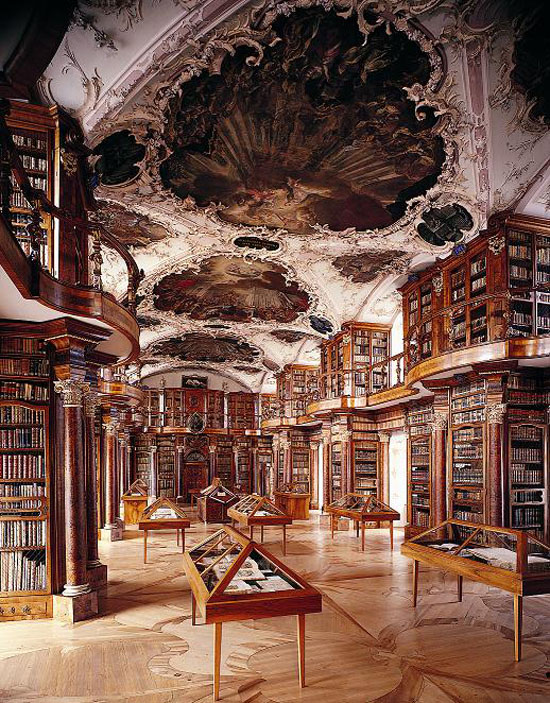 The Abbey Library of Saint Gall is the oldest library in Switzerland. The library’s founder, Saint Othmar, is also credited with establishing an abbey of the same name in 719, known as one of the oldest monastery libraries in the world. Saint Gall is home to roughly 160,000 volumes, including manuscripts dating back to the 8th century. In 1983, the United Nations’ Educational, Scientific, and Cultural Organization named the library a World Heritage site, calling it a “a perfect example of a great Carolingian monastery”. The library offers online access to many of its holdings through an electronic database though, as a general rule, pre-1900 books can only be read on-site. 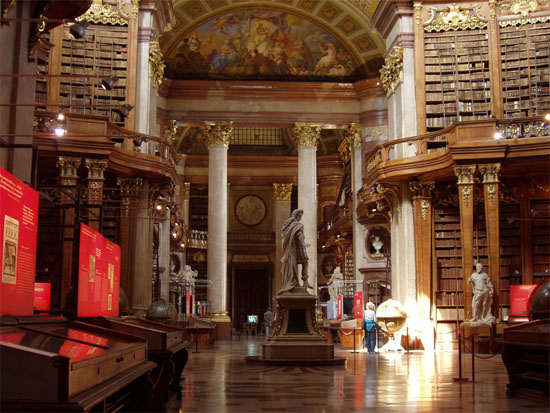 Much like the Library of Congress in the U.S., the Austrian National Library is responsible for managing the collection of all publications that appear in Austria. Works of special prominence include the world’s foremost Globe collection, rare books dating from the 4th century, a UNESCO Memory of the World Programme item (the Vienna Dioscurides, a 6th-century illuminated manuscript exploring medicine and healing), and a map collection that dates back to the 16th century. Originally housed in the Prunksaal, the library is currently located at Hofburg Palace and the baroque Palais Mollard-Clary, housing 7.4 million items within its comprehensive collection. 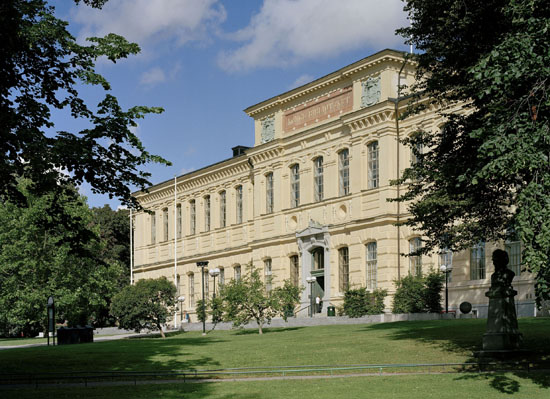 The National Library of Sweden is responsible for preserving all Swedish printed and A/V material. Since the 1500s, there has been some form of National Library in Sweden, made possible initially through purchases of collections from Swedish monasteries that were later destroyed in the Reformation and, later still, via war spoils from the Thirty Years War. To supplement its holdings, the library obtained the Library of Würzburg and the Royal Library of Prague during The Thirty Years War, as well as obtained a 13th-century copy of the “Devil’s Bible,” which can be viewed online here. Today, Sweden’s National Library holds more than 20 million objects. 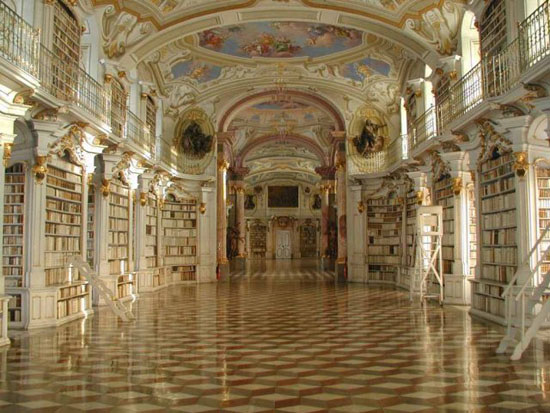 The Library of the Benedictine Monastery is the largest monastery library in the world. The library holds 70,000 volumes, including 1,400 manuscripts and 900 incunables. Some items in the library’s collection were gifted by Archbishop Gebhard, who founded the monastery in 1074. As part of an overall design inspired by the Enlightenment, the ceiling of the library is decorated with seven cupolas, highlighting elaborate frescoes by Bartolomeo Altomonte that display the progression of human knowledge. 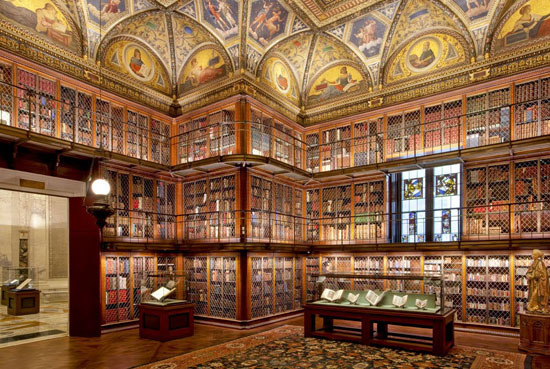 The Morgan Library & Museum was formed in 1906 to hold the private collection of banking magnate J.P. Morgan, including manuscripts, printed books, prints, and drawings. Items of special prominence in Morgan’s collection include illuminated and original manuscripts, works by Sir Walter Scott and de Balzac, and drawings by masterful artists like Leonardo, Raphael, Picasso, Michelangelo, and Rembrandt. Interestingly, Morgan was apparently also drawn to unusual collectibles to add to his holdings, including scraps of paper written on by Bob Dylan for what would become “Blowin’ in the Wind,” concept drawings for Antoine de Saint-Exupéry’s The Little Prince and a Charles Dickens manuscript of A Christmas Carol. 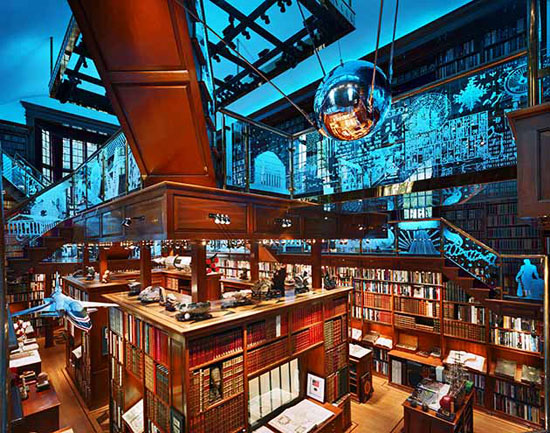 While we didn’t expect to find a privately owned library worthy of our list, let’s just say it was a pleasant surprise to learn that American inventor and entrepreneur Jay Walker used his wealth to develop a comprehensive private library. Christened “The Walker Library of the History of Human Imagination,” the library located in Walker’s Connecticut home has been called “the most amazing library in the world” by WIRED magazine as well as the subject of a TED Talk. The architecture incorporates a multi-level design inspired by the surreal works of M.C. Escher. It houses more than 50,000 books, including historic and museum-worthy manuscripts and publications. While the library is not open to the public, Walker has been known to host notable public figures at his home. 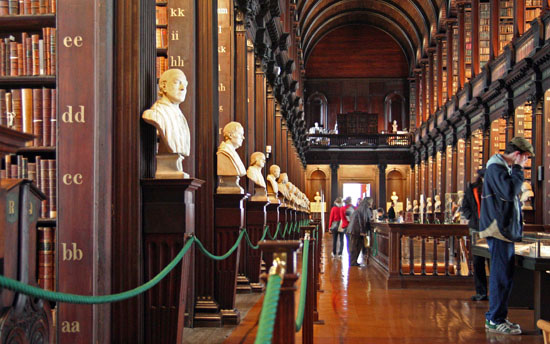 The Trinity College Library, fondly called the Long Room, is the largest library in Dublin, and responsible for many of the same functions for Ireland that the Library of Congress fulfills for the United States. Though the library actually consists of four separate buildings, the Old Library, built in 1592, is among Ireland’s biggest tourist attractions, home to the historic Book of Kells, a Gospel book created by Celtic monks roughly around 800 AD. It is also home to six million other printed works, including manuscripts, music, journals, maps, and special collections. 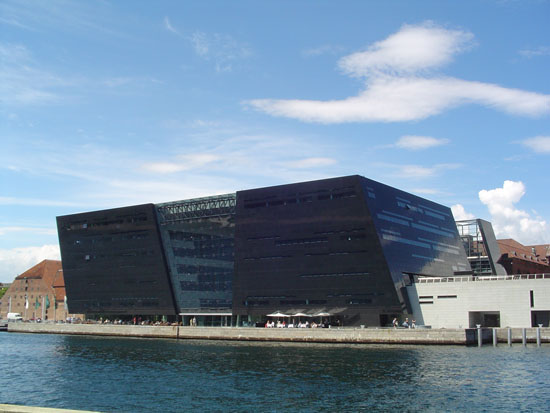 The Danish Royal Library is the national library of Denmark, founded in 1648 by King Frederik III. The library holds all works printed in Denmark since the 17th century and nearly every Danish book ever written, dating back to the first Danish book printed in 1482. The Danish Royal Library is the largest library among the Nordic countries. Many significant works, including the correspondence of Hans Christian Anderson and historical maps of the Polar Region, are held here. Holdings also include the Arnamagnæan Manuscript Collection, named for Icelandic scholar Arnas Magnæan, who dedicated much of his life collecting manuscripts from Iceland, Norway, Denmark, and Sweden until his death in 1730. 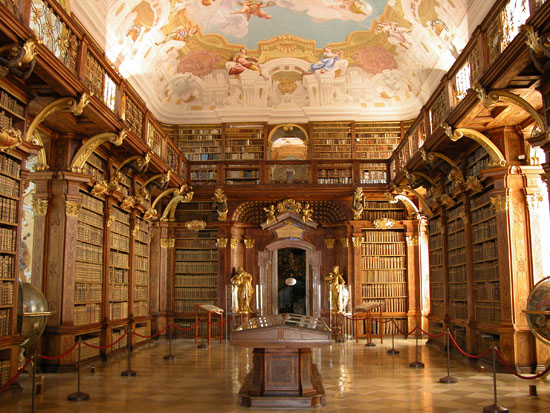 The formation in the 12th century of the Melk Monastery Library followed the founding of Melk Abbey and school of the same name around 1089. Word spread quickly, and the Melk Library became known as one of the largest manuscript holders in the world, also emerging as an authority in manuscript production. Today, the library’s high ceilings, adorned with beautiful frescos painted by Paul Troger, guard what is still one of the world’s biggest library when it comes to collections of medieval manuscripts, as well as a prominent collection of musical manuscripts.

And another 35 from the same source.
https://www.thebestcolleges.org/amazing-libraries/

I am retired at The International Peace Resource Center Library
https://www.facebook.com/LiteracyResource

“I have always imagined that Paradise will be a kind of library.”
― Jorge Luis Borges

“A university is just a group of buildings gathered around a library.”
― Shelby Foote

“The only thing that you absolutely have to know, is the location of the library.”

“If you want to get laid, go to college. If you want an education, go to the library.”