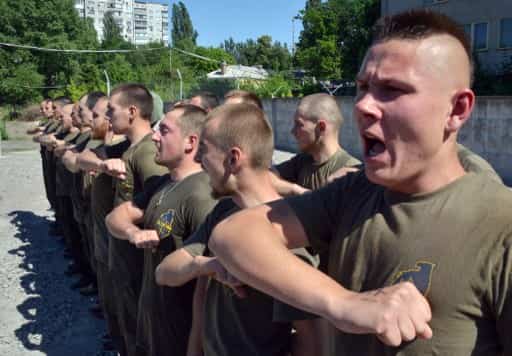 Woody Guthrie~ All You Fascists Bound To Lose

Tear the fascists down – Woody Guthrie

Jews began returning to Kyiv at the end of the war, but experienced another pogrom in September 1945.[132] In the 21st century, Kyiv’s Jewish community numbers about 20,000. There are two major synagogues in the city: the Great Choral Synagogue and the Brodsky Choral Synagogue.[133]”

Before the war about 160,000 Jews resided in the city, comprising about 20 percent of Kiev’s population. Approximately 100,000 Jews fled the city in advance of the Germans. During the first days of the German occupation, two major explosions, apparently set off by Soviet military engineers, destroyed the German headquarters and part of the city center. The Germans used the sabotage as a pretext to murder the remaining Jews of Kiev. On September 29–30, 1941, SS and German police units and their auxiliaries murdered the Jewish population of Kiev at Babi Yar, a ravine northwest of the city. As the victims moved into the ravine, Einsatzgruppe C detachments shot them in small groups. According to reports by the Einsatzgruppe to headquarters, 33,771 Jews were massacred in two days. In the months following the massacre, German authorities stationed at Kiev killed thousands more Jews at Babi Yar, as well as non-Jews including Roma (Gypsies), Communists, and Soviet prisoners of war. It is estimated that some 100,000 people were murdered at Babi Yar. This was one of the largest mass murders at an individual location during World War II

“Western diplomats and human rights organizations must urge Ukraine’s government to uphold the rule of law and to stop allowing the far right to act with impunity. International donors can help by funding more initiatives like the United States Agency for International Development’s projects supporting training for Ukrainian lawyers and human rights defenders, and improving equitable access to the judicial system for marginalized communities.

There’s no easy way to eradicate the virulent far-right extremism that has been poisoning Ukrainian politics and public life, but without vigorous and immediate efforts to counteract it, it may soon endanger the state itself.”

Kyiv was surrounded in 1941 as the Nazis closed in. The Russian army defended the city.

On Sept. 19, 1941, German Field Marshal Walter von Reichenau’s 6th Army fought its way into Kyiv. By noon, the Germans had seized the old citadel and raised the Nazi flag, the swastika.

In the end, 665,000 Russian soldiers were taken prisoner in the Kyiv pocket, historian and retired U.S. Army Col. David M. Glantz wrote in his 1995 book “When Titans Clashed.”

Many of them would die of starvation, on death marches, and in labor and concentration camps. Of the 3.3 million Russians captured in 1941, roughly 2 million would be dead by the next year, Stahel wrote. 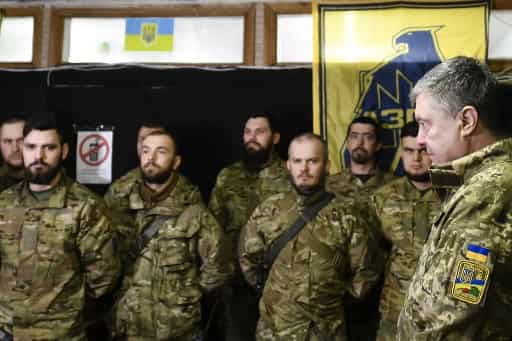 The unit was led by Andriy Biletsky, who served as the the leader of both the Patriot of Ukraine (founded in 2005) and the SNA (founded in 2008). The SNA is known to have carried out attacks on minority groups in Ukraine.

In 2015, Andriy Diachenko, the spokesperson for the regiment at the time said that 10 to 20 percent of Azov’s recruits were Nazis.

The unit has denied it adheres to Nazi ideology as a whole, but Nazi symbols such as the swastika and SS regalia are rife on the uniforms and bodies of Azov members.

In January 2018, Azov rolled out its street patrol unit called National Druzhyna to “restore” order in the capital, Kyiv. Instead, the unit carried out pogroms against the Roma community and attacked members of the LGBTQ community.

“Ukraine is the world’s only nation to have a neo-Nazi formation in its armed forces,” a correspondent for the US-based magazine, the Nation, wrote in 2019.

What has been the international response to Azov?
In June 2015, both Canada and the United States announced that their own forces will not support or train the Azov regiment, citing its neo-Nazi connections.

The following year, however, the US lifted the ban under pressure from the Pentagon.

In October 2019, 40 members of the US Congress led by Representative Max Rose signed a letter unsuccessfully calling for the US State Department to designate Azov as a “foreign terrorist organisation” (FTO). Last April, Representative Elissa Slotkin repeated the request – which included other white supremacist groups – to the Biden administration.

Looks like Russia is telling hard truths and American people are being forced to support Nazis and thugs in Ukraine….

This war was preventable.

Biden could not find the courage to stop it.

“The terms ‘nazism’ and ‘fascism’ evoke, in the Russian context, absolute evil that you cannot bargain with,” said Sergei Fediunin, a political scientist at France’s National Institute for Oriental Languages and Civilisations.

“The only option is to fight and destroy it.”

Efraim Zuroff, the Director of the Simon Wiesenthal Center in Israel, denounced Canadian troops for training neo-Nazi fighters in Ukraine.

“His comments followed a report by Radio Canada on Monday that in November 2020, Canadian troops were photographed training members of the Azov Regiment, as well as at least one soldier with the identification marks of the SS division “Galicia”, Ukrainian unit that fought on the side of the Nazis in World War II.”

This is far from Russian propaganda,” Zuroff told Citizen. “These people are neo-Nazis. There is an element of the ultra-right in Ukraine, and it is absurd to ignore it.”