The most recent murders in Gaza are just as sick as the murders last summer.  These are crimes, pure and simple.  A responsible American government would cut off funding until Israel and the IDF decide to abide by the rule of law.  But American cannot take the moral high ground until we shut down our own 25 unprovoked wars of aggression.

“Since the protests began on March 30, Israeli forces have killed 124 Palestinians in the besieged coastal enclave and wounded more than 13,000 people.”

Today my brilliant photographer colleague Mohammed Abed al-Baba was shot in the leg by Israeli fire in northern Gaza.

He was around 200 metres from the border fence, wearing a press vest 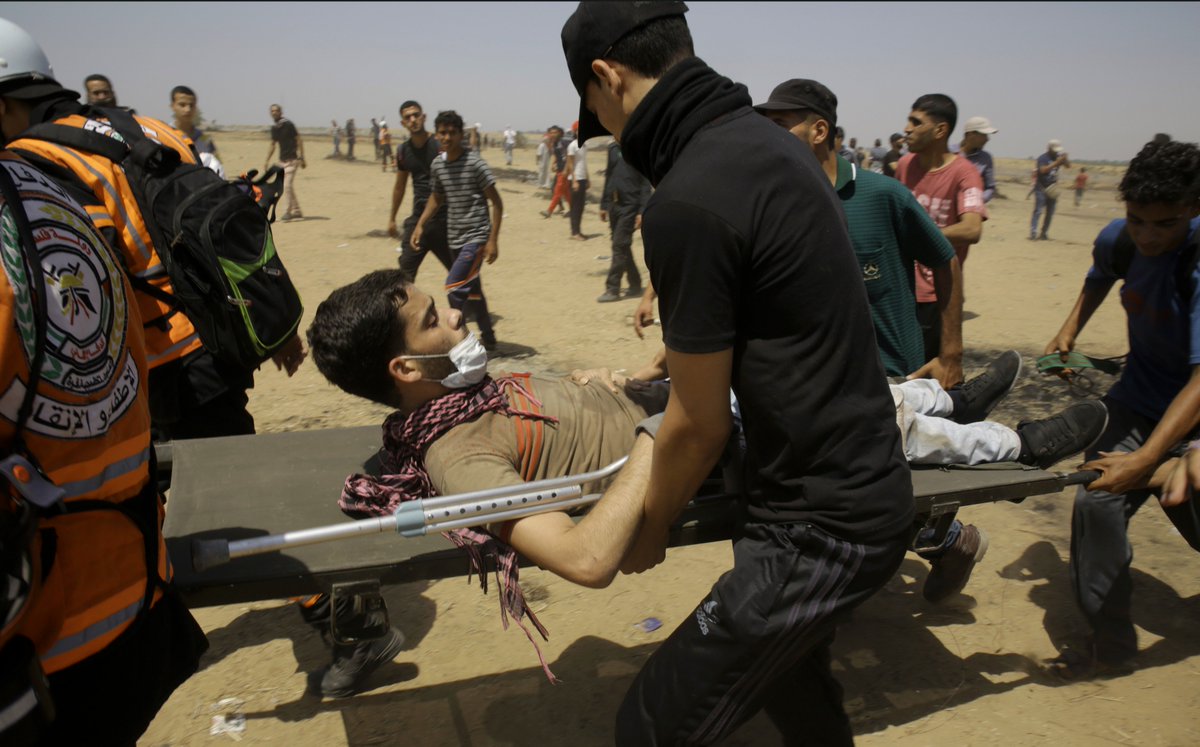 Razan al-Najjar was killed by Israeli live fire during the protests east of Khan Younis, a city in southern Gaza, according to Palestinian health officials.

The 21-year-old volunteer paramedic died of a gunshot wound to the chest, the Palestinian health ministry said.

A witness said she was shot while running towards the fortified fence to help a casualty.

Wearing a white uniform, “she raised her hands high in a clear way, but Israeli soldiers fired, and she was hit in the chest”, the witness told Reuters news agency.

~This immoral and unprincipled carnage in the prison of Gaza must end.
Tim Flanagan

Facts All US Citizens Need to Know
About Israel and PalestinePosted on July 12, 2014

Gaza (along with the West Bank and East Jerusalem) is occupied Palestinian territory under international law, determined by the vast majority of the world, as well as the highest court in the world, the UN’s International Court of Justice.Israel continues to be in constant and continual commission of illegal aggression against Palestine by occupying it:  sadistically blockading Gaza and frequently committing terrorism against its civilians, including targeting them with chemical weapons provided by US taxpayers –(see “Rain of Fire” by Human Rights

As documented by Amnesty Int’l, Human Rights Watch, and many others, Israel intentionally targets and murders civilians, including children, en masse.Israel also kidnaps and tortures children, including keeping them in outdoor cages, over night, in winter.But, even ignoring international law and that Gaza is under illegal Israeli occupation…Gaza did not initiate this current round of violence;Israel did:Western/US/Israeli propaganda says the violence started with the kidnapping and

That is a lie:

On May 20th, the Israeli government murdered 2 unarmed Palestinian teens, one on video, and wounded a third.  The subsequent firing of pathetic scrap metal rockets from impoverished Gaza, which have killed no one, were in fact launched in response to earlier Israeli bombings, killings, assassinations, and arrests of Palestinians, including children.  Since the year 2000, Israel has killed 1,500 Palestinian children, while Palestinians have killed 1

Amnesty International also noted that Israel’s 2009 massacre of Gaza would not have been possible without the illegal funding (money and weapons) and support Israel gets from the USA.

Palestinians have a right to defend themselves.  Israel is a nuclear power with an army, navy and ground forces.

The Palestinians have none of these and are being held prisoner while Israel steals their land, confiscates their resources, cuts off all commerce, destroys homes, builds illegal walls and settlements on Palestinian land, and attacks at will with overwhelming military force.
tmf

“Gazans have no army, navy, or air force with which to defend.  Israel, as any nation, has a right to defend itself, but it confuses offense with defense.  Israel is on the offensive in Gaza.  Israel,with its overwhelming military strength, is attacking and invading Gaza in violation of international and U.S. law.  Israel’s construction of settlements violates the Oslo agreement.  Its Central Bank dries up the Gaza economy and blocks payments to Gazan civil servants. Its total control brings the Palestinians to utter subjection and total despair.

There will be no peace, for now, as Gaza is turned into an abattoir, to collectively punish Gazans for supporting Hamas. Israel, in its attempt to divide Hamas from the Gazans, will actually multiply Hamas’ strength in Gaza and elsewhere.

Israel can kill, injure, and humiliate Palestinians at will, with impunity, which is exactly what gave rise to Hamas and strengthens Hamas’ hold in Gaza, even as the IDF advances.”

Last year, Israeli commandos boarded a Turkish aid ship on its way to Gaza. It is reported that they killed ten to fifteen activists and injured thirty more.  The flotilla was attacked in international waters, 65km off the Gaza coast. Organizers said the flotilla was carrying 10,000 tones of humanitarian aid headed to Gaza challenging the Israeli blockade.

The Israeli Army Radio said soldiers opened fire “after confronting those on board carrying sharp objects”. Israel says they offered to deliver the aid if the ships turned back.

The Free Gaza Movement, the organizers of the flotilla, however, said the troops opened fire as soon as they stormed the ships. They also said they were fully within international law delivering the aid directly to Gaza.

Turkey in a written statement condemned Israel over the deadly attacks: “This deplorable incident, which took place in open seas and constitutes a fragrant breach of international law, may lead to irreparable consequences in our bilateral relations,” it said.

Israel Invades Gaza Because It Can

There will be no peace, for now, as Gaza is turned into an abattoir, to collectively punish Gazans for supporting Hamas. Israel, as any nation, has a right to defend itself, but it confuses offense with defense. It is on the offensive in Gaza….