“No matter how cynical I become, I just can’t keep up.”
– Lily Thomlin

“Reality is a crutch for people who can’t cope with drugs.”
― Lily Tomlin

“I can handle reality in small doses, but as a lifestyle, it’s much too confining.”
― Lily Tomlin

“When I was growing up I always wanted to be someone. Now I realize I should have been more specific.”
― Lily Tomlin

Lily Tomlin is an actress and comedian known for roles on television shows such as Laugh-In and films such as Nashville.
QUOTES

“You don’t really need to get married, but marriage is awfully nice. Everybody I know who got married, they say it really makes a difference. They feel very very happy about it.”

Some of the wacky characters that Lily Tomlin created were showcased on the hit comedy series Laugh-In, which ran from 1969 to 1973, and the show catapulted her to stardom. Tomlin went on to appear in dramatic and comedic films, including Nashville and Nine to Five, and since that time, she has continued to mix the serious and the humorous. In 1985, the comedian/actress won a Tony Award for her one-woman Broadway show. Her recent work includes the Netflix series Grace and Frankie.

Lily Tomlin, one of America’s foremost comediennes, continues to venture across an ever-widening range of media, starring in television, theater, motion pictures, animation, and video. Throughout her extraordinary career, Tomlin has received numerous awards, including: seven Emmys; a Tony for her one woman Broadway show, Appearing Nitely; a second Tony for Best Actress, a Drama Desk Award and an Outer Critics’ Circle Award for her one woman performance in Jane Wagner’s The Search for Signs of Intelligent Life in the Universe; a CableAce Award for Executive Producing thefilm adaptation of The Search; a Gramm 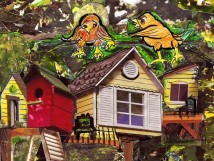 y for her comedy album, This is a Recording as well as nominations for her subsequent albums Modern Scream, And That’s the Truth, and On Stage; and two Peabody Awards–the first for the ABC television special, Edith Ann’s Christmas: Just Say Noël, and the second for narrating and executive producing the HBO film, The Celluloid Closet. In 2003, she received the Mark Twain Prize for American Humor and, in December 2014, was the recipient of the prestigious Kennedy Center Honors in Washington DC.

Lily Tomlin and Jane Wagner are easy to find…
picture at left by Lily Tomlin
https://twitter.com/LilyTomlin