Bernie’s votes for war are in the book!  (the Congressional Record) 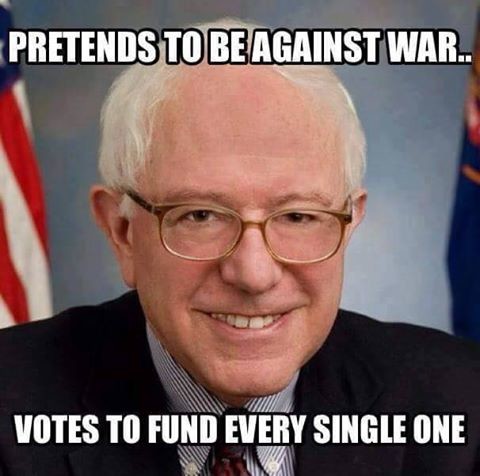 some advantages in his difference over others in his party on domestic policy, he’s always been hawkish on foreign policy. Biederman described Sanders as discarding a progressive worldview in exchange for a better vision at home.”[Foreign policy is] not a giant priority for him, but because American liberals default to endless war, that’s what he defaults to,” Biederman explained.”

“Sanders did some good by exposing the country to left wing politics and positions. But the “Independent” Senator from Vermont is just another Democrat and he’s starting to use his influence to corrupt the movement. It’s time to say goodbye to Bernie—and to his hanger-ons like Tulsi Gabbard and Tim Canova—before it’s too late and the energy of the left is subsumed into the war machine to provide alternative philosophical reasoning for the perpetuation of endless conflict.”

“In defending Israeli attacks on Gaza, Bernie Sanders said “you have situation where Hamas is sending missiles into Israel,” adding that those rockets are often originating from populated areas. As members of his audience began to shout out their opposition to his statements, Sanders responded, “Excuse me! Shut up! You don’t have the microphone.”

“Bernie Sanders knows that our illegal drones kill an average of 50 innocents per strike, but

he wants to continue this program.

“In an interview with NBC’s Meet the Press, host Chuck Todd asked the independent senator from Vermont if drones or special forces would play a role in his counter-terror plans.
“All of that and more,” Sanders said.”
“In a statement to the Washington Post, Vermont Senator Bernie Sanders declared his support for the Obama administration’s policy of bombing the Islamic States of Iraq and Syria (ISIS).
…In directly aligning himself with the Middle East foreign policy of the Obama White House, Sanders underscored that he was not running as an “antiwar” candidate or offering any alternative to the policy of increasing military aggression via American imperialism around the world.”
https://thepeaceresource.com/2016/01/06/bernie-sanders-war-profiteer/ 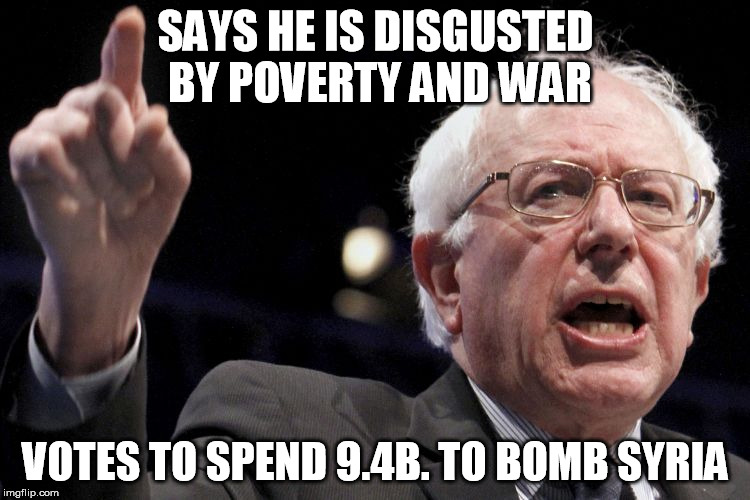 Based on his responses during the first debate and statements posted on his website, Sanders is clearly not the antiwar candidate he claims to be.
“I supported the war in Afghanistan. I supported President Clinton’s effort to deal with ethnic cleansing in Kosovo. I support air strikes in Syria and what the president is trying to do,” stated Sanders during the first debate.
“Yes, I happen to believe from the bottom of my heart that war should be the last resort, that we have got to exercise diplomacy. But yes, I am prepared to take this country into war if that is necessary,” said Sanders, jumping at the chance to make sure everyone knows that he is not opposed to war.
Fortunately for Sanders – who was hoping to court antiwar Democrats and Independents – he wasn’t asked if he supports the Saudi Arabian dictatorship’s invasion of Yemen (he does).
Nor was he asked if he supports the coup government in Ukraine (he does).

And he wasn’t asked about his position on Israel/Palestine (he typically votes for funding to Israel and supported their 2014 war on Gaza).
…From an antiwar perspective, Sanders is bad on Afghanistan, Syria, Yemen, Ukraine, Palestine, Russia and Iran.

And that’s the bottom line for many liberals. As long as Bernie gives them a bigger piece of the American Empire’s pie they are fine with him being pro-war. 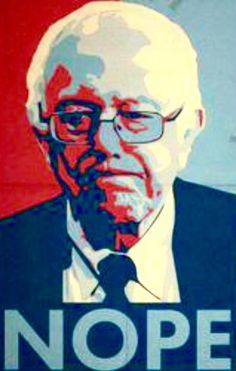 at the same time supporting those in Syria trying to overthrow the brutal Bashar Assad dictatorship.”

The United States has been bombing targets in Syria, including the Islamic State and al-Qaida affiliate Jabhat al-Nusra, since September 2014. Those strikes have reportedly killed at least 240 civilians. Bernie is OK with this.

In spite of his claims of being antiwar, Sander’s “hawkish” support of Clinton’s military actions in the 1999 Kosovo War caused one of his advisers to quit. When antiwar activists occupied Sanders’ office in 1999 because of that support of Clinton’s war policies, he had them arrested.

In August of 2016, Bernie Sanders said he would not end U.S. drone strikes in countries such as Pakistan and Hemen, arguing such strikes must be deployed “selectively and effectively.”

http://www.telesurtv.net/english/news/Bernie-Sanders-Rejects-Syria-No-Fly-Zone-Backs-Airstrikes–20151003-0015.html
“There are two ways to be fooled. One is to believe what isn’t true; the other is to refuse to believe what is true.”

But we can make better choices…
We can reject the corporate war parties. They have failed us for 45 years.  We can embrace the Green Party’s New Deal.

Vote Green for a sustainable future.  Leave the war parties behind!

Please Donate for Literacy and to keep this resource online..