Take it back with A Green New Deal

Key points of the Power to the People Plan:

Create millions of jobs by transitioning to 100% clean renewable energy by 2030, and investing in public transit, sustainable agriculture, and conservation.

Jobs as a Right:

Guarantee economic human rights, including access to food, water, housing, and utilities, with effective anti-poverty programs to ensure every American a life of dignity.

Health Care as a Right:

Establish an improved “Medicare For All” single-payer public health insurance program to provide everyone with quality health care, at huge savings.

Education as a Right:

Establish a foreign policy based on diplomacy, international law, and human rights. End the wars and drone attacks, cut military spending by at least 50% and close the 800+ foreign military bases that are turning our republic into a bankrupt empire. Stop U.S. support and arms sales to human rights abusers, and lead on global nuclear disarmament.

It is time we did the right thing:

U. S. Aggression against smaller and less-powerful nations is wrong.

This American aggression, against nations who have not attacked us (even bombing seven in the last 8 years, killing innocents) is inexcusable.

The sell-out or buyout of The Onion was the Tip of the Iceberg… but the Green Party New Deal has our backs.  While the corporate cons on both sides of the aisle are trying the same old trickle-down, lesser-evil politics of fear, compromise and surrender… The Green New Deal has them scrambling for cover… Stories break.   […]

Regardless of nominee, do the right thing

Bernie’s tired trickle-down theory where we spend trillions, killing billions, making new enemies and bankrupting the state is untenable. Unending wars are not a platform for peace, justice or a future. And we have already lost parts of our freedom and most of our jobs… The war economy quit working a long time ago.

“It has been well-known for years that when Bernie (Sanders) votes, he leans right…”

“…In directly aligning himself with the foreign policy of the Obama White House in the Middle East, Sanders underscored that he is not running as an “antiwar” candidate or offering any alternative to the policy of increasing military aggression by American imperialism around the world.” 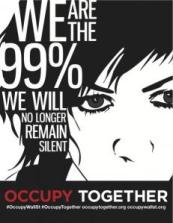 “We have an important choice to make. A life or death choice. And it is time we listened to real people instead arguing over which lesser evil is less evil. The lesser evil theory has been entirely, completely and absolutely debunked.”

Thanks for helping to keep this resource online.  You make a difference!

Source: Power to the People: A Green New Deal