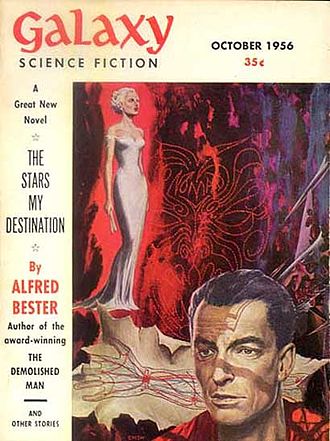 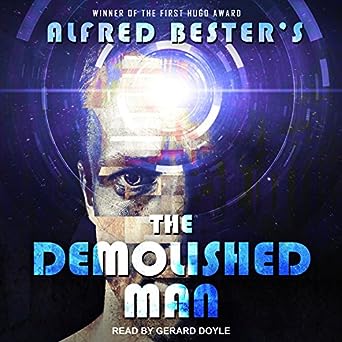 and
proving no useful guide.

Peace, justice, equity and freedom are goals,
but antiquated isms are no longer the issue.

Instead of retreating to a failed past, we can invent sustainable futures where everyday people endure, survive and prevail. Today’s America was carved out of the homeland of more than 500 tribes…

“Tension, apprehension,and dissension have begun, and “a change is gonna come.”

Left and right are directions…

conservative and liberal are attitudes…

The Demolished Man, by Alfred Bester, is an American novel, science fiction and inverted detective story, that was the first Hugo Award winner in 1953. The story was first serialized in three parts, beginning with the January 1952 issue of Galaxy Science Fiction,[1] followed by publication of the novel in 1953.

this ditty when he needs a rhyme that can’t be gotten out of one’s head. This is to hide his murderous intent from mind-reading police.

The book is better than this plot summary might indicate.

In fact it’s a famous classic that won the HugoAward. Also classic is his The Stars My Destination. Let’s borrow a polished plot summary under fair use: “a psychological thriller in which a tycoon decides to kill a rival and get away with it in an era in which telepathic cops catch every serious criminal; both in its sparkling portrayal of multi-person mind-to-mind dialogue, and in its narrative trickery, the story of Ben Reich and his nemesis Lincoln Powell is one of sf’s most effective contributions to the noir thriller.”

Sometimes it takes me several decades to catch up to the rest of the world. Reading The Demolished Man (1953) is one of those long overdue experiences. I seem to have been collecting editions of the book but never taking the time to read the book even though I know it to be the kind of genre blending tale I enjoy that mixes crime with science fiction. I kept putting it off. After coming across yet another copy of the book (the second paperback printing seen at left) I felt the universe was trying send me a subtle message and so I bought it — making my fourth copy of the book — and finally read the thing. Talk about Amazing Stories!Why did I ever wait this long?

It’s the 24th century and crime is practically non-existent in the world thanks to a highly developed psychic police force and other Espers who can read the minds of individuals with criminal tendencies. The Espers using their psychic powers weed out the criminal thought patterns and can put an end to the crime before it even begins. Multimillionaire Ben Reich is determined to acquire the business of his rival D’Courtney. When D’Courtney refuses to accept his business offer after several Reich decides to eliminate his competition thus making it easier to acquire his business. He enlists the aid of an easily corrupted and bribeable Esper, buys an ancient 20th century pistol from a crooked pawnshop dealer, and carries out his murder plan on the night of a hedonistic party at the home of D’Courtney’s wealthy and addle-brained neighbor.

But the plan goes awry. D’Courtney’s daughter interrupts Reich in the very act of the crime. She witnesses Reich shoot her father and flees the house clad only in a nightgown. Reich then pursues her thinking it should be easy since she is inappropriately dressed and that ought to slow her down, but she manages to elude his capture. The hunt is on for her so that his crime can be the perfect one he planned.

On the very first page I knew this was going to be something unique.  Here is a sample of the unusual ideas Bester employs in his futuristic setting: 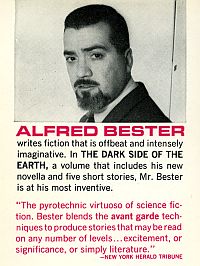 at random on objects in the room, simulating a calm he could not feel.

The walls of green jade, the nightlight in the porcelain mandarin whose head nodded interminably if you touched him, the multi-clock that radiated the time of three planets and six satellites, the bed itself, a crystal pool flowing with carbonated glycerine at ninety-nine point nine Farenheit. 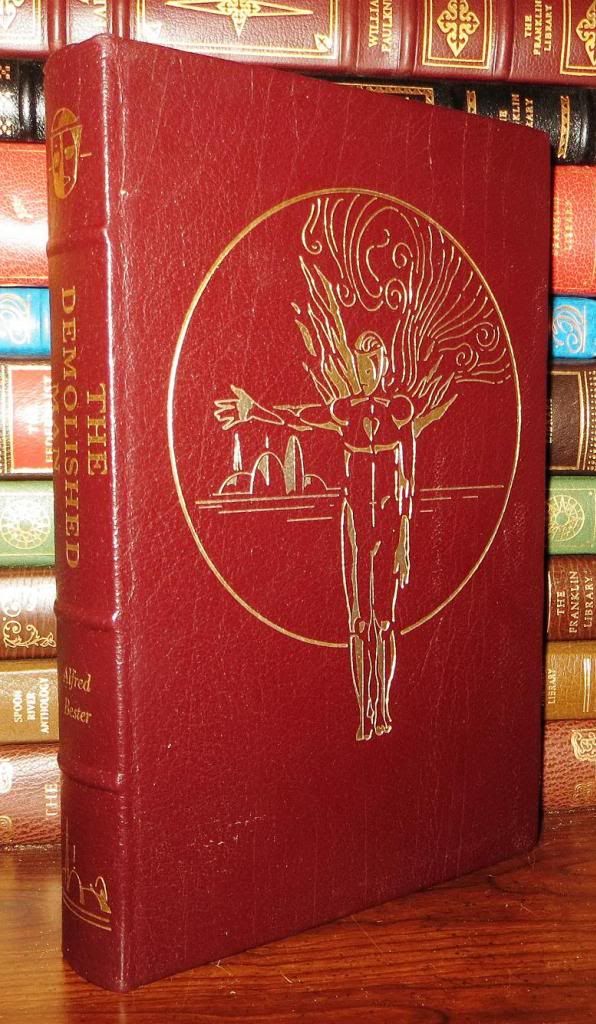 From the opening paragraph in which we learn that Reich is being haunted by a recurring dream starring “The Man With No Face” to the strangely named characters with symbols in parts of their names (Sam @tkins, Duffy Wyg&) or just plain strange (Chook Frood, Snim Asj) to the satellite of a faraway planet that has become an adult playground that goes beyond even the fantasies of Westworld to the deadly weapon Reich uses that is a weird combination of pistol and knife (see the excellent realization in the UK DJ at left) this book is jammed pack with originality.  Nearly everything may seem old hat to a modern reader because it has been heavily borrowed from by writers like Dick, Vonnegut and dozens of SF screenplay writers. This book held me in its spell for a brief day and a

half.  I couldn’t get enough of it and sped through the pages at a lightning pace.

I know this is hardly a forgotten book among the SF cognoscenti, but I’m not part of that

elite bunch. To those of you who don’t read any SF for fear it will brand you “one of the geeks” (as I once feared ages ago) forgive me while I lapse into my fanatical mode. READ THIS ONE! It’s science fiction for people who don’t like science fiction and it will change your opinion of the entire genre. I am sure of it. Now I’m on the hunt for Bester’s others works including The Stars My Destination which I found last year in its 1st paperback edition and foolishly passed it up, placed it back in the box where I found it only to see it snapped up immediately by a young woman standing right next to me. One of the cognoscenti, no doubt.

“But in order to be an iconoclast, an author must be more than merely aware of the idol he wishes to destroy. He must be intimate with it and understand it in all its aspects. This means that he must have devoted serious thought to it, and have beliefs of his own which will stand up in the place of the broken idol. In other words, any child can complain, but it takes an adult to clash with accepted beliefs . . . an adult with ideas.”

“The mind is the reality. You are what you think.”
― Alfred Bester, The Demolished Man 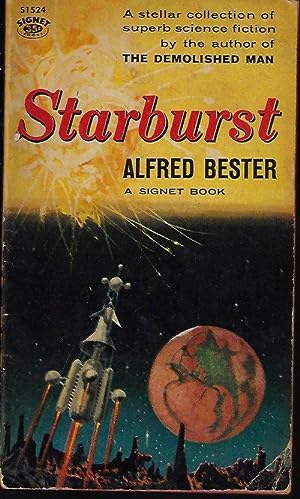 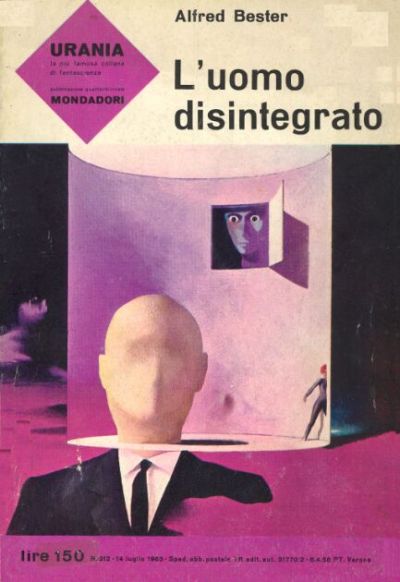