“The Democratic Party is not going to allow Bernie Sanders to squeak through, so where would we be if we don’t have a Plan B?

When Bernie gets knocked out of contention, there would be no place for people to go if not for our campaign. The difference between our campaign and Bernie’s is that we’re not looking for the Democratic Party to save us. We are establishing an independent base for political resistance where we can continue to grow, because there is no relief on the horizon and we need to get busy right now building the lifeboat we’ll need to rescue ourselves and our children.”

“…after years of losing hope under President Barack Obama, progressives in the U.S. are ready for radical change that neither corporate party has offered: change that includes
genuinely free healthcare, student debt forgiveness and military spending that no longer rivals what the rest of the world spends combined.”“The crisis in the health care system is a symptom of a much broader crisis across all sectors of society, where essentially policy has been hijacked for the benefit of the wealthy few”

“There’s no excuse for us to be quaking in our boots about casting a vote that could not only liberate us but the rest of the world from the certain fate that we have now under either party of oligarchy and imperialism.” 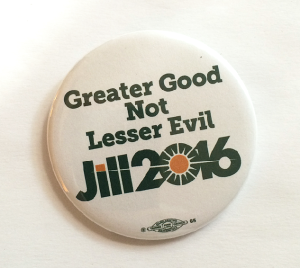 “The Democrats are as deep in corrupt political money as anyone and what they deliver is as bad as the Republicans.”

“Just being slightly less worse than the worst possible scenario is not acceptable. We have to be willing to stand up and throw off those chains of powerlessness. In the words of Alice Walker, the biggestway people give up power is by not knowing they have it. We have it. The people of Guatemala knew they have it. There’s no excuse for us to be quaking in our boots about casting a vote that could not only liberate us but the rest of the world from the certain fate that we have right now under either party of oligarchy and imperialism. We have the ability to change course for the USA and the entire world.”

This content was originally published by teleSUR at the following address:

“People have only as much liberty as they have the intelligence to want and the courage to take.”